The Eastbourne Climate Coalition is creating a new buzz in town

The Eastbourne Eco Action Network is collaborating with the Eastbourne Climate Coalition to curate and manage an ambitious programme of community-run events in the E-Hive Marquee in Princes Park during the E-Festival on Eastbourne’s seafront that runs from July 29th to 31st. All the events in the E-Hive Marquee will be free to the public and are all organised by volunteers, showcasing what local people are doing – or could do – to help save our planet as a viable home for humanity. For example, there’ll be an Eco Fashion Show with local people modelling their beautifully upcycled/recycled clothes, with a guest appearance from a local seamstress who featured on the BBC’s Great British Sewing Bee. There’ll also be a Sussex flower grower, who was a CPRE Countryside Award Winner in 2020, talking about how cut flowers flown in from abroad have a huge carbon footprint and why it’s best to buy sustainably grown British flowers. 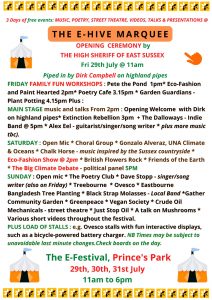 The E-Hive Marquee will be open from 11am to 6pm on each of the three days of the festival, requiring many volunteers to ensure that the events within the marquee run smoothly. If you’d like to volunteer, please email: eastbourne@cop26coalition.org

But what is the Eastbourne Climate Coalition? The most recent conference of the United Nations Intergovernmental Panel, on Climate Change, COP26, took place in Glasgow in November 2021. During that momentous event there were innumerable rallies and demonstrations throughout the world organised by civic groups determined to send a message to governments everywhere that urgent action is needed to avert the threat of catastrophic climate change. Eastbourne was no exception, as a large march and rally in the town was organised by the Eastbourne COP26 Coalition, co-ordinating a wide range of local organisations together under one banner to demand urgent climate action.

Since then, the Eastbourne COP26 Coalition has morphed into the Eastbourne Climate Coalition (ECC) and now has a membership of over 40 local organisations, and later articles in this column will showcase some of those organisations, such as Bespoke and Just Stop Oil. The ECC is following up on COP26 with a project to create Eastbourne’s very own Climate Emergency Centre, a hub for climate action where local people and community groups can gather to collaborate on climate-related issues in the local area and beyond. The ECC has recently completed a successful crowdfunding appeal to raise its first pot of funds for the Climate Hub project and is busy searching for suitable premises in central Eastbourne. But the ECC is not waiting for premises before engaging with local people about climate action. Hence its involvement with the E-Hive Marquee, which is in effect a perfect opportunity to demonstrate the kinds of activities that can take place in a local Climate Hub.

COP26 revealed how far the world still has to go to prevent climate breakdown, and Eastbourne is very much in the front line of climate change, especially as regards the increased flooding risks that are a consequence of the rising sea levels and stronger storm surges of a rapidly warming world. The climate news may seem grim, but the good news is that pretty much all the actions needed to alleviate the climate crisis have a huge range of co-benefits that actually make life easier, cleaner, healthier, safer, and ultimately happier – such as cleaner air and water, better walking and cycling infrastructure, more urban trees to provide cool shade in heatwaves, more wildlife returning to the countryside, and so on.

Moreover, just engaging in climate actions can be fun too, as the events in the E-Hive will demonstrate, with songs, music, dance, creative workshops, poetry, fashion shows, and much more. Yes, the Eastbourne Climate Coalition is buzzing around town, as you can discover for yourself when you fly into the E-Hive Marquee and see what’s pollinating there!

This website uses cookies to improve your experience while you navigate through the website. Out of these cookies, the cookies that are categorized as necessary are stored on your browser as they are essential for the working of basic functionalities of the website. We also use third-party cookies that help us analyze and understand how you use this website. These cookies will be stored in your browser only with your consent. You also have the option to opt-out of these cookies. But opting out of some of these cookies may have an effect on your browsing experience.
Necessary Always Enabled
Necessary cookies are absolutely essential for the website to function properly. This category only includes cookies that ensures basic functionalities and security features of the website. These cookies do not store any personal information.
Non-necessary
Any cookies that may not be particularly necessary for the website to function and is used specifically to collect user personal data via analytics, ads, other embedded contents are termed as non-necessary cookies. It is mandatory to procure user consent prior to running these cookies on your website.
SAVE & ACCEPT